Back to the “Protection of Crush”

Can a patient involved in a vehicle-to-vehicle collision sustain a crushing type of injury? Yes, of course. However, outside of the emergency department, such injuries are quite rare. Rather, chiropractors primarily treat whiplash inertial injuries, as noted above.

What goes up must come down. To protect the athlete, the landing pit is constructed of foam. Imagine what the consequences would be if the landing pit were made of concrete; the landing athlete would no doubt be injured. 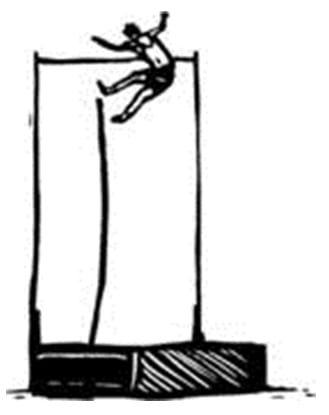 The foam in the landing pit protects the athlete because it “crushes” when the athlete lands on it. It is precisely this crushing that dissipates the energy from the falling athlete, protecting her/him from injury. In contrast, concrete would not crush and disperse the energy, and the athlete would be injured.

These injury-sparing principles apply to motor vehicle collisions. When a struck vehicle crushes, it dispersed energy that otherwise would accelerate the vehicle, increasing occupant inertial injuries. This concept has been recognized for decades and is often published. As an example, in 1982, Ian MacNab, MD, succinctly states (17):

“The amount of damage sustained by the car bears little relationship to the force applied.  To take an extreme example: If the car was stuck in concrete, the damage sustained [crush] might be very great but the occupants would not be injured because the car could not move forward, whereas, on ice, the damage to the car could be slight but the injuries sustained might be severe because of the rapid accelerations permitted.”

The point is that vehicle “crush” is protective of the occupant because it dispersed energy that would otherwise increase the vehicle’s acceleration. In the opening story, the crushing of the roof of the falling window washer was certainly responsible for saving his life. Of course, this all changes if the vehicle is crushed so severely that the occupant also sustains a “crushing” injury.

Other studies that support this “crushing” principle include:

• In 1986, the Journal of Musculoskeletal Medicine publish a study titled (18):

Objective Findings for the Diagnosis “Whiplash”

The amount of damage to the automobile bears little relationship to the force applied to the cervical spine of the occupants.  The acceleration of the occupant’s head depends upon the force imparted, the moment of inertia of the struck vehicle, and the amount of collapse of force dissemination by the crumpling [crushing] of the vehicle.

• In 1989, the journal of the Society of Automotive Engineers, published a study titled (19):