The headline and front-page photographs were stunning and unbelievable. On Saturday, November 22, 2014, the front page of the San Francisco Chronicle newspaper led with this headline (1):

“The first inkling that office workers scurrying along Montgomery Street had that something was wrong came when they looked up to see a blue blur falling from the sky. Some thought it was debris—but then it got closer, and the crowd began to scream and scatter. It was a man, plummeting 11 stories towards them.”

“With a thump and a crash of shattering glass, the middle – aged window washer smashed into a moving car just after 10 a.m. Friday morning. He lay wincing and miraculously alive …on the crumpled roof of a green Toyota Camry.”

Peter Melton, from the California Department of Industrial Relations, noted:

“It seems pretty clear the cushioning of the car he fell onto kept him alive.”

The universe and our world are under the control of the principles of math, physics, chemistry, etc. The principles of inertia have likewise always been with us, but they were not officially acknowledged through publication until Isaac Newton wrote, in the year 1687, the book Mathematical Principles of Natural Philosophy.

When the laws of inertia are applied to a whiplash injury, it is quickly pointed out that different parts of a single object can have different inertias, depending upon how the object’s mass is distributed. Specifically the human body (a single object) can have different inertias between the trunk and the head. In a rear-end motor vehicle collision, the struck vehicle, its seat, and trunk of the occupant are quickly propelled forward, while the head, having its own inertial mass, will remain at rest. The head remains still, while the body is moved forward, under the head. This gives the appearance that the head is extending upon the trunk, the so-called “hyperextension” phase of a rear-end motor vehicle collision.

Hyperextension As Trunk Is Pushed Under Head 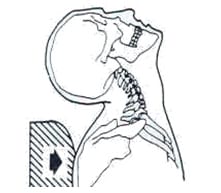 Under these circumstances, the most vulnerable body part to injury is not the trunk nor the head, but rather the part of the body that balances these two larger inertial masses to each other, the neck. Because of the large inertial masses of the trunk and the head, the neck is historically very vulnerable to “inertial injury.” In this context, an “inertial injury” means that there is no direct blow or contact injury to the neck.

A horrible example of a neck inertial injury is the injury sustained in “shaken baby syndrome.” The violent shaking of the baby’s trunk causes the baby’s head to inertially “bounce” on the neck, often leading to catastrophic neck injuries. The neck and spinal cord can sustain horrific injuries, even though there is no direct blow to the head or neck of the child; these are inertial injuries.

Cervical spine (neck) inertial injuries caused by motor vehicle collisions are the rule, and their occurrence is not controversial. Yet, because there are many pain-producing tissues in the neck (discs, facet capsules, ligaments, muscles, tendons, nerves, bone, skin, etc.), research has been conducted to determine if there is one particular tissue in the neck that might be responsible for the predominance of whiplash mechanism induced cervical spine inertial injury pain. Alas, one such tissue has been identified. It is the facet joint capsular ligaments (2, 3, 4, 5, 6, 7, 8). In fact, in 2002, Nikolai Bogduk, MD, PhD, states of the Uhrenholt study (4) in the following, attached, Point Of View: